Wetherby’s Jump season started in October 2018 and drew to a close on Thursday 11th April, and what an exciting 6-months we have had.

Our leading trainer this season is Philip Kirby, whose season kicked off with a fantastic treble here on bet365 Charlie Hall Saturday last November with Nautical Nitwit, Lady Buttons and Wemyss Point.  Phil went on to achieve a total of 11 winners at Wetherby this season and we wish him every success with his flat horses during the summer and look forward to seeing the Green Oaks team back here later in the year.

No suprise then that with the Kirby horses running so well, that Thomas Dowson scooped the honours for leading Conditional Jockey.

Points for our Leading Jockey were very close going into the last fixture with just 6 points or a second place between four individuals.  The final winner however was Harry Skelton, who although had fewer winners than Sean Quinlan had more consistently placed rides through the season.

Presentations took place on 11th April with Emma Hill from Country store Millbry Hill presenting the winners with their prizes.

We would like to congratulate the winners and than everyone for their support of our Jump season – see you all back here on Wednesday 16th October 2019. 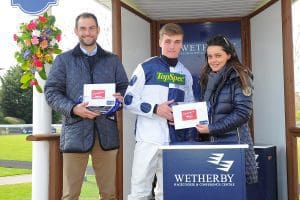 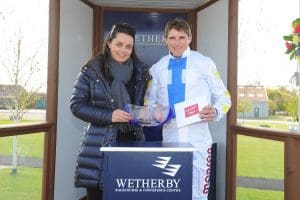 Final Leaderboard can be viewed here