David O’Meara is preparing his string for the forthcoming Go Racing In Yorkshire Summer Festival, sponsored by Sky Bet.

David was the Goldsborough Hall sponsored leading trainer of the festival last year, with seven winners and the Upper Helmsley handler anticipates a very busy week ahead across the eight host courses.

“It’s always a very busy week for us, with lots of Yorkshire owners who are all keen on running their horses in the county and as many of them that are fit and suitable to run will be busy.”

“In terms of the leading trainer of the week title, it’s kind of something you don’t really think about until you’re half-way through and then if you’re close to winning you start to take notice.”

“We’re all involved in this sport because we like racing and you wouldn’t be involved if you weren’t keen on winning!”

“There’s definitely more of a buzz around the racecourses during the festival week and we’re looking forward to being there again.”

Among the horses on the gallops were recent Royal Ascot winner Get Shirty and Maria Branwell who was third in the Queen Mary Stakes at the same meeting.

Danny Tudhope, who was victorious aboard Get Shirty and partnered him on the gallops was another looking forward to the Summer Festival week. Danny has previously been the Sky Bet sponsored leading jockey of the week and he said,

“There’s a great atmosphere and it’s good to be in action at all the local courses, close to home. It’s hard to aim for the leading jockey of the week title, as jockeys are not always in control of where they are riding but it’s a nice thing to win if we can.” 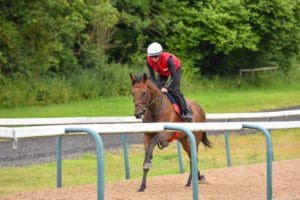 The jockeys will be able to warm up for their rides on the track with a game of ‘Paddock and Chips’ in the parade ring before racing starts. The football skills competition sees the jockeys scoring points by chipping footballs into a target. Danny Tudhope was runner up in 2019,

“My football skills haven’t improved since last year, but I’ll try and get some practice in before the week starts.”

Another jockey who is new to the Summer Festival is Jason Watson. He said,

“I’m looking forward to the week. There’s a different vibe up here to down south and people enjoy their racing so much. Being attached to David’s is a massive help, he’s a highly established trainer up north and down south and has a very good team to really go to war.”

The Go Racing In Yorkshire Summer Festival, sponsored by Sky bet gets underway at Ripon on Saturday, July 16. 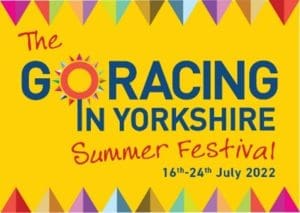